IAM Stronger with MY Union

The IAM members of Local 1295 who work at Thorncliffe Retirement home in Nepean, ratified their first collective agreement late last week. In addition to annual wage increases, improvements were made to vacation and overtime. The members will also receive a uniform allowance and will be joining the IAM Pension Plan in the second year of their contract. District 78 Business Representative Jim Snider, stated that, “negotiations committee members Fakhri Khamseh and Norma Bautista remained steadfast throughout the process that improvements needed to happen”. 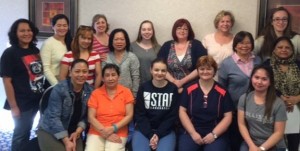