Ottawa, ON – Tuesday morning 320 CLC delegates will descend upon MP’s on Parliament Hill for the largest Canadian Labour Congress lobby on record and once again the dominant group will come from the IAM. This time 65 Machinists will lobby parliamentarians on the need for a National Pharmacare plan, pay equity, employment insurance and pension reform to protect worker’s pensions during bankruptcy proceedings. Pension reform is of particular interest to the Machinists who want the Companies Creditors Arrangement Act changed so that workers are given priority over shareholders during bankruptcy proceedings. Monday night, delegates from 54 unions were given instructions on how to lobby their local MP. 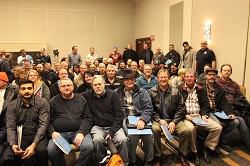