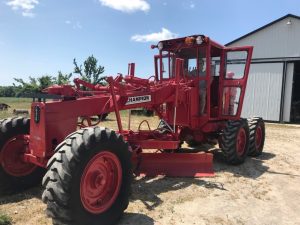 IAM District 78 representatives attended a retirees breakfast in Goderich on July 11for members of , (now Local 1975, St. Thomas). The group enjoyed breakfast at a nearby restaurant, followed by their regular monthly meeting at the Canadian Legion. At the meeting, members shared their condolences for past members Howie Gottschalk, and Brian Brindley. In addition, the group listened to an audio recording describing member’s recollections of their time at Champion/Volvo Graders in Goderich for the IAM history project. The recordings were an insightful description of the positive memories and impact the group had on Goderich, and the greater community. The group also announced they will be holding a 10 year celebration barbecue next July, and all were encouraged to attend. Following the meeting the group was invited to tour the Champion Antique Grader Club facilities. The group observed past and present projects, and heard stories of the progression of road grader technology from those who built the graders at the Goderich production facility.