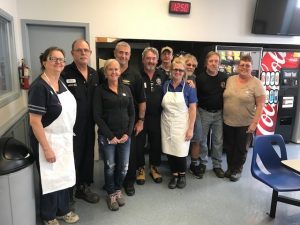 Cambridge, ON – It has had three corporate employers and merged with other IAM Local Lodges but one thing has remained constant, only one Union – The IAM. Last week, Local 2330, now part of IAM Local Lodge 103 turned to its past to celebrate its first collective agreement signed 50 years ago.

It began on May 5, 1968 when IAM Local Lodge 2330 signed its first collective agreement with Cello Products, then located on Bishop Street in the town of Preston, Ontario. Wages then were $1.15 an hour and things were pretty good for the members who worked there. Within a year, Cello became part of the Long Manufacturing Division of Borg Warner Canada, four years later Preston was amalgamated with neighbours Galt and Hespeler to form the new City of Cambridge. Over the years, the number of members at the local rose and fell with the state of the local and provincial economy and in 2003 the employer changed names again, this time to the current Dana Canada Corporation. As often is the case with a declining membership, other local lodges with similar problems were merged into Local Lodge 2330. In 2007, LL 863 at Ball Packaging in Burlington was the first, followed by Local Lodge 1547 at Anvil and Norfolk Volunteer Firefighters in Simcoe as well as Local Lodge 1673 at Flowserve in Brantford, both in 2011. Finally in 2013 Local Lodge 2330 merged with the oldest and the first IAM Local Lodge in Canada, 103 of Stratford.