“This is a flashpoint in the fight for all workers.” – Pickthall IAM Local 2301 strike: stern warnings from labour and political leaders 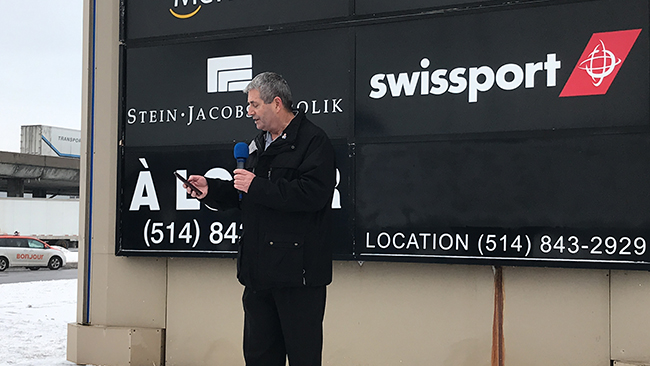 Montreal, QC – On strike since 31 December, 2019, IAM Local 2301 has brought about a broad coalition of labour leaders and political parties in the Montreal area, and across Canada. Leaders from various sectors spoke in strong terms about the danger to Québec workers, as well as airport workers across the country.

Among the many serious issues affecting the members of IAM Local 2301 are a severe cut to wages, health and safety and high staff turnover – all of these related to the widely-prevalent, and widely abused practice of Contract-Flipping. Contract-Flipping involves restarting a tendering process to find a lower bidder to lower costs and increase profits. In a Contract-Flip, workers lose their jobs, seniority and pension plans. If they want to get their job back, it is usually with significant setbacks in their working and living conditions. And then they have to reapply for the very jobs they held!

Addressing the rally, Stan Pickthall, Canadian General Vice-President of the IAM said, “The battle waged at Montreal-Trudeau Airport by our members from Local 2301 is also that of all Canadian airport workers. And we are ready to bring the fight to the House of Commons so that Contract-Flipping is no longer used to destroy the achievements of thousands of workers in Canada. This is a flashpoint in the fight, and we have taken it on!”

Speakers at the rally had much to say about the treatment of workers, as well as the passive role of the federal government, not to mention the purely profit-driven motives of employers which disregard the well-being of workers.

The FTQ, Quebec’s labour umbrella body has been supportive of the IAM’s fight all along. “Among other things, it is because there is no anti-scab law in the Canada Labour Code that this conflict continues. Ottawa must act and put an end to this injustice that allows Swissport and other companies under federal jurisdiction to hire “scabs” without any shame,” said FTQ President Daniel Boyer. Other leaders weighed also in. 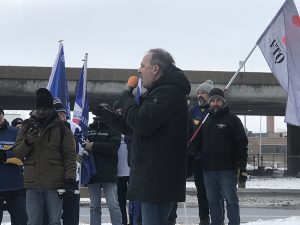 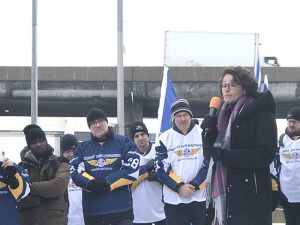 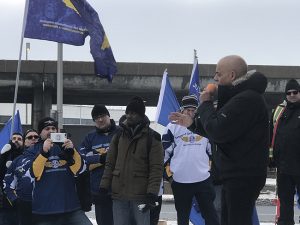 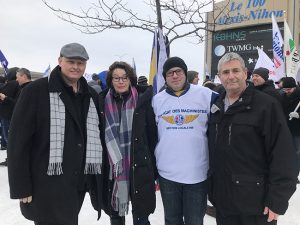 On strike since December 31, 2019, the IAM members are demanding, in particular, better wages and an improvement in their group insurance coverage. Contract-flipping

Workers at Swissport Canada Inc., members of IAM Local 2301, are aircraft supply workers, dispatchers, fuel storage maintenance workers and mechanics. Their collective agreement expired in August 2019 and they have been trying to reach an agreement with their employer since 23 May, 2019.

This article was originally posted on the IAM Canada website. View the original post here: “This is a flashpoint in the fight for all workers.” – Pickthall IAM Local 2301 strike: stern warnings from labour and political leaders