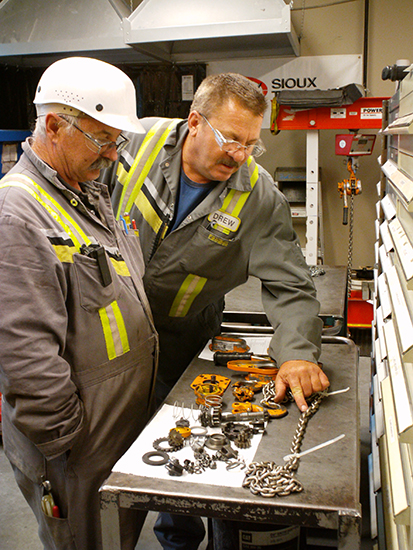 Reo Elkin, Business Representative for IAM District 250 is retiring this Friday, 29 January, 2021. We caught up with him and spent a few minutes discussing his union life.

“I became a Business Rep when Stan Pickthall became Chief-of-Staff at the Canadian Office seven years go. Dale Gentile, who was the Rep, asked me if I was interested and I said ‘Yes’.

“Before that I was involved in my Vancouver Local 692 and working at Finning. I was a Shop Steward, Recording Secretary, Chief Shop Steward, as well as a Delegate to the District. Being involved in the District gave me a better view of how things were connected within the IAM. This helped when I stepped into the Business Rep. position.

“Companies keep trying to erode the Collective Bargaining Agreement. It’s our job to make sure they respect the contract and respect our members! It takes a lot of effort but it’s worth it. I was glad to help our members get what they are entitled to.”

The stress in the job is incredible and affects the home life. When asked how he dealt with it, he replied, “The drive home is 30 minutes. It gives me time to unwind and put things into perspective. You never really get away from the job. The phone rings at all times because of the members’ work schedules, so you have to take the calls because they need our help.

“My family was very understanding about those calls at night or on weekends. I couldn’t have done the job without their support.”

What advice would you give to IAM members?
Get involved with the union and with your community! People try to take care of their own small circle. That’s important, but we have to look at it a little more globally. When we help the larger community, we ultimately help ourselves and our families also. Always try and involve the younger people. They have the energy and creativity we often need.

Are union still important?
YES. Don’t take your wages or your benefits for granted. Companies didn’t GIVE it to us. We fought for it and they’ll take it away if they can. Right-to-Work is a big problem because it will take away what we’ve won. ALWAYS fight against it because it doesn’t help working people or their families.

Any last words?
I was lucky to have met a lot of nice folks who helped me in my job as a Rep. I appreciate that they took the time to talk. I look forward to having many more conversations in the future – hopefully the ones where we share our personal lives and not just work. For now, I’m going to kick back and relax. I have quite a few projects at home – an old car and an old boat that I’ve been planning to restore, (and that Boler too, Dale), so I’ll get to that soon.

Reo has been an IAM member since December 1974. His replacement will be announced by DBR Gerlach in the near future.