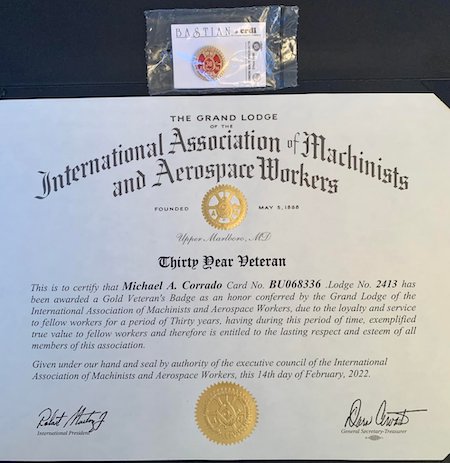 Toronto, ON – It was a big number, but Mike Corrado took it in stride as he accepted a commemorative pin and a certificate from Local Lodge 2413.

Corrado, a District 140 General Chairperson, was presented the 30-year pin and a 30-year membership certificate when he attended LL2413’s monthly meeting. It is Mike’s home local.

The pin and certificate were presented by Stan Theofilaktidis, Secretary-Treasurer of the local.

“Mike has been an excellent representative and represents the members well. He deserves accolades for his 30 years of service, and especially for the last two years during this pandemic,” said Gord Falconer, IAM Canada Chief-of-Staff, who was present at the meeting.

Mike became an IAM member in August 1992, joining Local Lodge 2413. He was very involved in his local, assuming many positions including President and Secretary-Treasurer. After being elected as General Chairperson, he has worked hard at representing the service groups at many Ontario airports, as well as organising new members into the IAM.