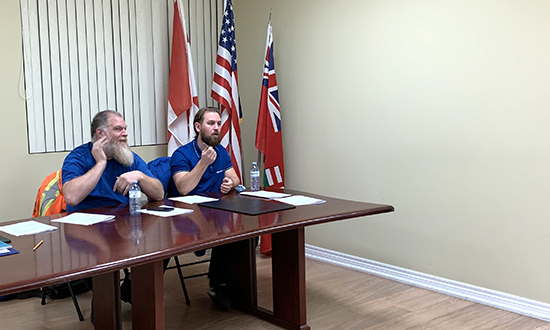 Toronto, ON – A hybrid vote resulted in the ratification of a new 3-year Collective Agreement for IAM Local Lodge 235 members working at Mettler Toledo.

“Due to the efforts of the bargaining committee of Robert Gardner, Aaron Miller, and Chris Kelly, the membership was engaged throughout the process,” said Eric Johnston, IAM District 78 Business Representative. “These have been challenging times, but we met those challenges.”

The efforts of the Bargaining Committee allowed their members to achieve:

“Because of the distance of the members to the north­, a hybrid ratification vote was held. Local members attended the IAM District 78 offices in Etobicoke, while the members in the north attended and voted virtually.

The IAM represents four bargaining units with Mettler Toledo Inc., One in B­ritish Columbia, two in Ontario and one in Quebec. Mettler Toledo is a multinational manufacturer of scales and analytical instruments. They install, maintain and repair weighing instruments for a variety of industries, including food retailers.

Mettler Toledo is the largest provider of weighing instruments for use in laboratory, industrial, and food retailing applications. The 23 highly-skilled members of the Ontario unit are centralized in the Greater Toronto Area, but the region also includes Northern Ontario with two of the twenty members in Thunder Bay.

This article was originally posted on the IAM Canada website. View the original post here: Members of LL 235 at Mettler Toledo in the GTA ratify new agreement in hybrid vote