The party of ten first visited the CASO Station. This downtown landmark is a restored red brick building documenting the history of the railway companies that converged on St. Thomas, which became an important commercial hub. Nearby are the old workshops and the Elgin County Railway Museum. The museum has an extensive collection of rolling stock and railway memorabilia.

The group’s final destination was Tru-die Limited, tool and die manufacturers to the automotive industry. Company representative, Allen Annett, showed the group around the facility where precision machinery is used to make the tooling used by car manufacturers. 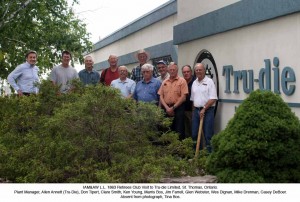