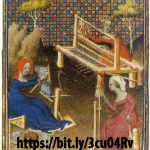 Yes, you’ve read it correctly, it’s been 700 years since women first began working in skilled trades. A fact that not only challenges what we know of women’s labour history, but it boggles the mind that such a long history in this field exists. As March marks a celebration of women’s history, of struggles overcome and those that remain, we should be reminded that this month is a call to reclaim women’s place in society. Reclaiming begins with learning of the rich history and tradition, in a field where women’s contributions are largely unknown.

To this day, the perception remains that women are just now entering skilled trades in increasing numbers; however, the truth is that women have had a presence in trades for a long time.

A fact obscured by history, but essential to women’s labour history is that in Germany, from the 1300s to the 1500s, it was documented that women worked in 200 occupations, most of which would later become male-dominated. Women were well-represented as smiths, masons, butchers, bakers, candlestick-makers, hat-makers, ale-brewers, wool-carders and retailers.

In England, seventy-two out of eighty-five guilds included women, and some guilds were predominantly female. In other guilds, female employment was as high as that of men. It was no different in Italy and France.

Women were also gaining equal footing in other professions.

As early as the 1300s, women were becoming schoolteachers, doctors and surgeons, and, in fact, rivalled university-trained men. Some female doctors became reputable and respected doctors. (16 female doctors are documented as having specialized in surgery, and certainly dominated the field of obstetrics. The number of female doctors increased considerably once the Caesarean cut was introduced in the 1200s, with female doctors exclusively performing the procedure.

This article was originally posted on the IAM Canada website. View the original post here: Women in Skilled Trades: Reclaiming a 700 Year Tradition